Applying the PerfluorAd® process at a major, west coast, international airport in July 2022, TRS Group, Inc. (TRS), with EFI Global, Inc. (EFI), performed a clean-out of aqueous film forming foam (AFFF) on a Pierce firefighting vehicle. AFFF contains per- and polyfluoroalkyl substances (PFAS), compounds that persist in the environment for centuries and have adverse effects on human health and the environment. The goal of the clean-out was to remove the contamination, specifically perfluorooctanoic acid (PFOA) and perfluorooctane sulfonate (PFOS), to the extent possible from the vehicle’s AFFF storage tank and dispersion network.

TRS performed a triple rinse (3x Rinse) of the AFFF tank with potable water prior to initiating the PerfluorAd® process to provide a comparison of the clean-out methods. As AFFF is designed to shed water, it is not surprising that the literature indicates that a 3x Rinse does not thoroughly remove PFAS. 3x Rinse involves filling and draining the AFFF tank with potable water three times, with some site-specific variations, and has been the method of choice when transitioning from C8 AFFF to C6 or to fluorine-free foam (F3) at the municipal and federal levels. Following standard protocols, TRS collected a water sample after the first rinse (baseline) and after the third filling and draining of the AFFF storage tank.

PerfluorAd is a plant-based, weak oleic acid that has a strong affinity to PFAS, forming small particles that are easily filtered.

Following the 3X Rinse, TRS initiated the PerfluorAd® method for the remainder of the clean-out, which includes generating and heating a PerfluorAd® solution and circulating it through the storage tank and foam dispersion network for about 90 minutes, followed with potable water for 60 minutes. TRS completed four flushes and treated the accumulated rinsate using PerfluorAd, filtered the generated flocs, and then polished the rinsate with liquid-phase granular activated carbon (LGAC). TRS completed the clean-out in four business days.

While the 3X Rinse did remove some PFOA, a fair amount remained. After applying PerfluorAd, the analytical results showed more than 99.9 percent removal of PFOA.

Figure 1 illustrates the PFOA reductions from baseline concentrations for 3x Rinse, the PerfluorAd® process, and the final rinsate after treatment with PerfluorAd. While the results for PerfluorAd were actually non-detect, we assume PFOA concentrations at half the detection limit. 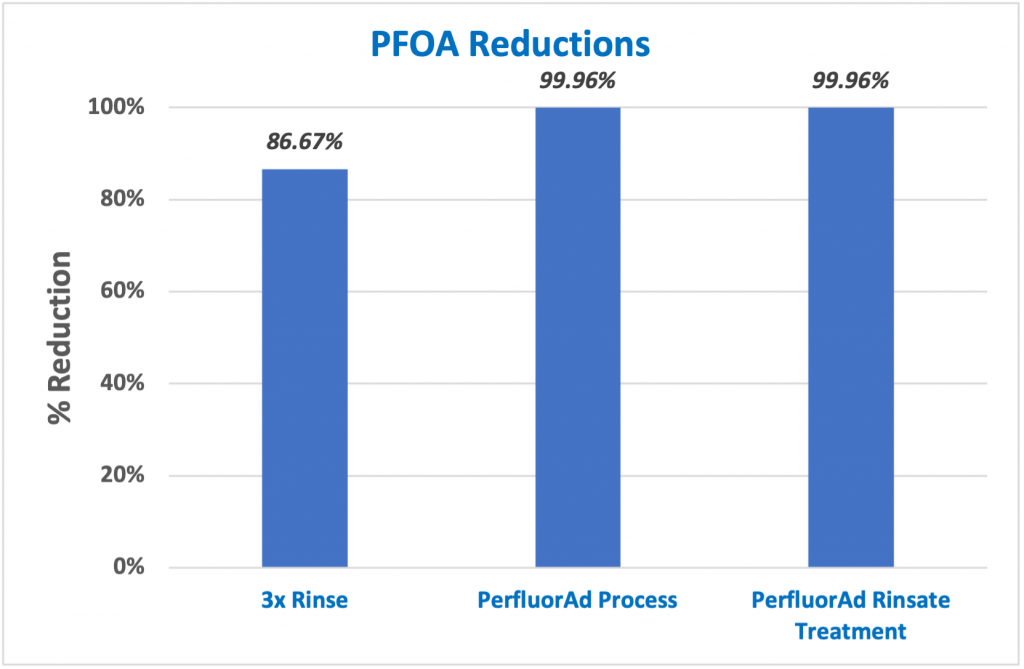 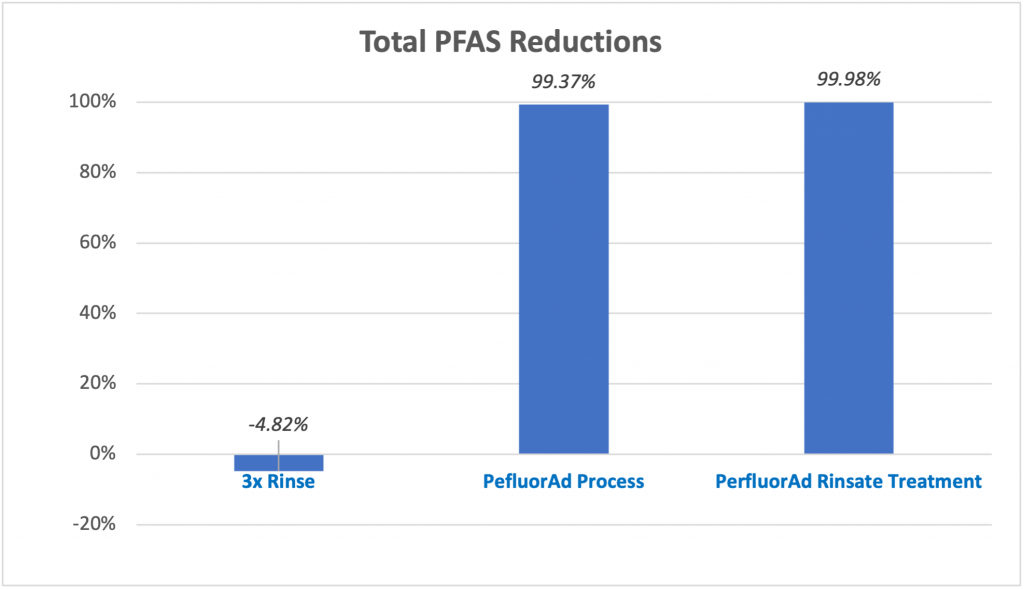 As noted previously, the scope of work also included a rebound test, which entailed returning to the vehicle after it was inactive for at least 48 hours. TRS established a potable water recirculation loop between the firefighting vehicle AFFF tank and a new, unused 300-gallon polyethylene tank. TRS recirculated the water between the two tanks at about 4 gallons per minute (gpm) for 150 minutes. Thereafter, TRS collected a water sample from the loop. Rebound results were non-detect for PFOA and PFOS.

TRS treated all the generated rinsate with PerfluorAd. Final PFOS and PFOA rinsate concentrations were non-detect, which, of course, were under the clean-up criteria of 2 ng/L.

Get in touch today