We are pleased to have Elizabeth Bishop of Haley & Aldrich as a guest contributor to our Bringing The Heat® newsletter blog. Elizabeth was a consultant on a TRS Group (TRS) thermal remediation project at a university in the Northeast. Join us in congratulating Elizabeth on her recent promotion to Senior Technical Specialist II.

As a Senior Technical Specialist at Haley & Aldrich, I provided technical guidance and oversight on a full-scale thermal remediation with tetrachloroethylene (PCE) impacts above the solubility limit in weathered bedrock. The remedial history for the Site is quite varied: in-situ chemical oxidation (ISCO) was conducted by another consultant, enhanced reductive dechlorination (ERD) was performed prior to thermal treatment, electrical resistance heating (ERH) was conducted to address site contaminants, and following thermal, enhanced in-situ bioremediation (EISB) was performed.  Haley & Aldrich took the project on following the ISCO pilot study where we further characterized the site, identifying elevated concentrations of PCE and carbon tetrachloride (CT), along with their daughter products.

ERD using zero valent iron was performed following our site investigation to address PCE and CT concentrations of up to 360 ppm and 60 ppm, respectively. While some decreases were observed, injection distribution in this low permeability site was a challenge, and further treatment was needed to reach the site goals. After discussions with the client regarding their timeline and planned use for the property, we ultimately moved forward with thermally remediating the site with a goal of 1 ppm of chlorinated volatile organic compounds (CVOCs) in groundwater. From design to demobilization, the thermal remediation was completed in a year and a half. This fast pace is attributed to how well Haley & Aldrich and TRS worked as a team.

ERH removed 100% of the carbon tetrachloride and 3,216 pounds of total CVOCs, which was 40% more than the design mass. As heat accelerates naturally occurring processes, we monitored subsurface temperatures and bacterial population dynamics over time to evaluate the potential for further contaminant reductions, particularly on the fringe of the treatment area. Following thermal, we performed two rounds of metagenomic analyses to characterize bacterial populations within and outside of the thermal treatment area. Nine months post ERH, the microbial populations were predominantly thermophilic bacteria with low concentrations of reductive dechlorinators. After temperatures further declined, the second round of metagenomics revealed that the presence of reductive dechlorinating bacteria increased; however, the population diversity within the source area were still primarily thermophilic and was not ideal for monitored natural attenuation (MNA). 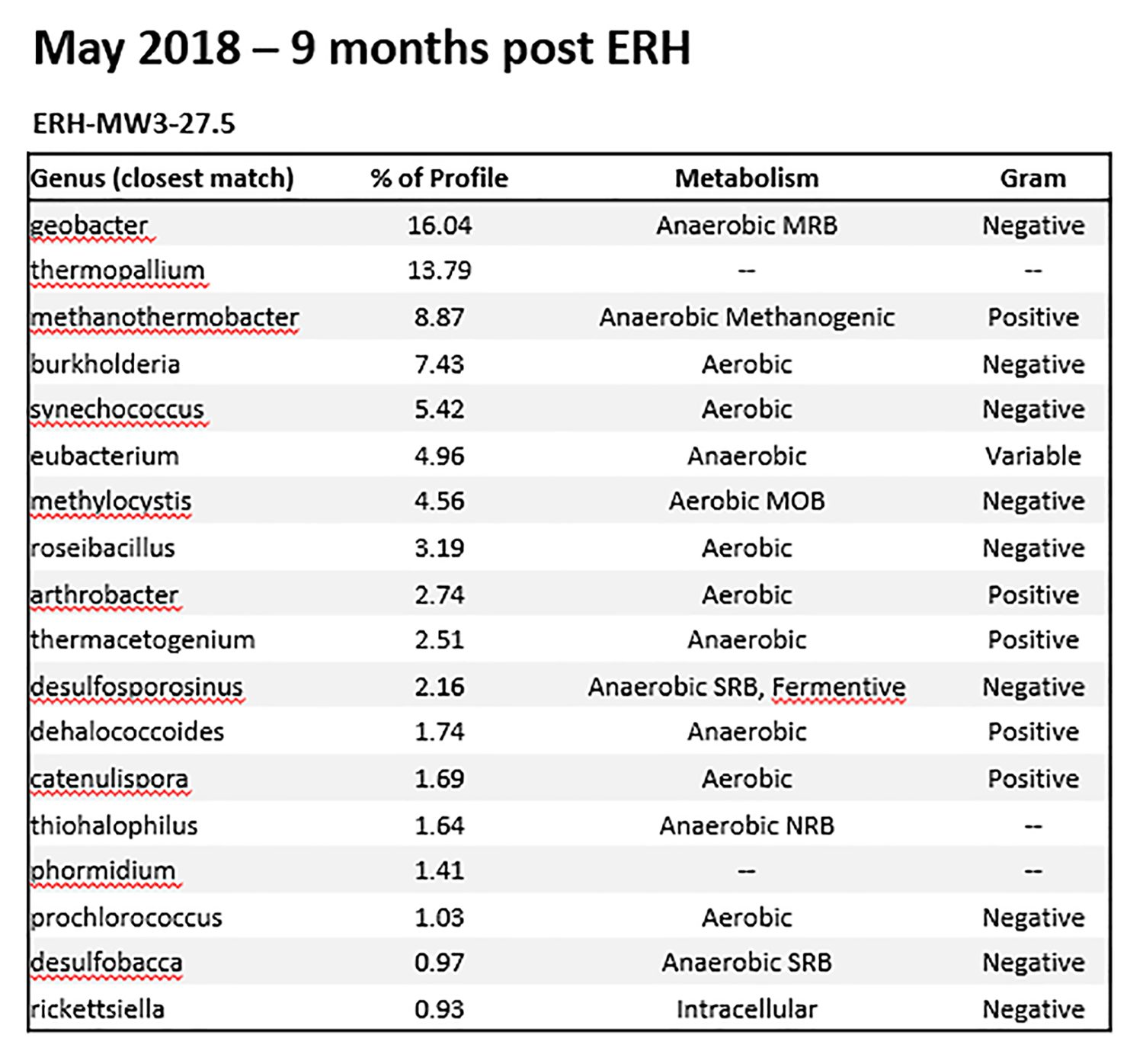 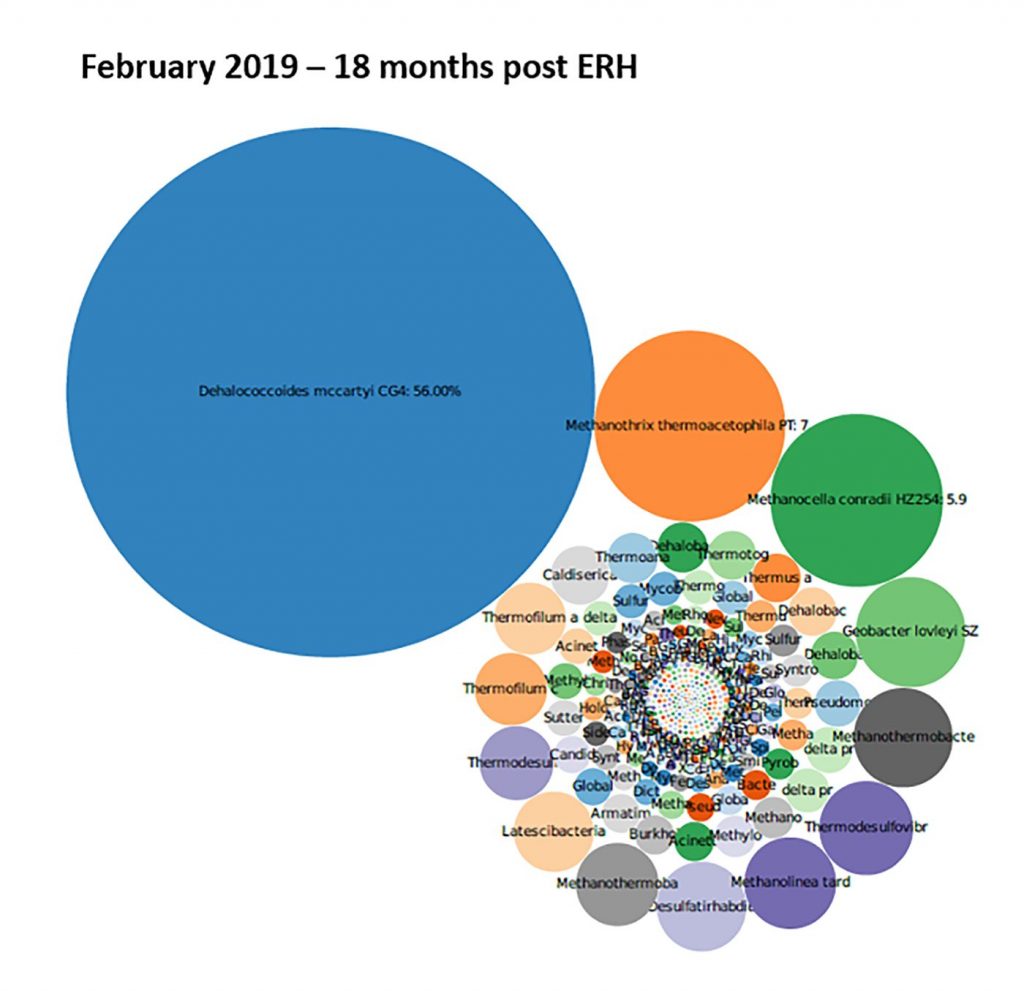 Following this finding and with subsurface temperatures reaching an optimal range for enhancing bacterial reductive dechlorination, an electron donor and bioaugmentation culture were recirculated through the fractured bedrock. With state regulatory agency approval, the electrodes remained in place increasing permeability in the weathered bedrock, thereby making the recirculation of groundwater and injection of the amendments less challenging than previously experienced. This recirculation event significantly stimulated biodegradation within and outside of the ERH treatment area. Following the bioaugmentation and electron donor recirculation, metagenomics indicated that reductive dechlorinating bacteria were now the predominant microbial populations. These results allowed us to apply for a long-term monitoring program for MNA and there are no further plans for remediation at the site. The length and width of the plume has decreased significantly and we have confidence natural attenuation is actively occurring, based not only on the reductions in CVOC concentrations, but also in the robust microbiological populations present in the ERH treatment area and the downgradient plume.  The thermal remediation was integral in reducing the CVOC concentrations and stimulating biodegradation at the site, although the populations within the treatment area retained the thermophilic populations longer than anticipated.  The final polishing step utilizing an electron donor and bioaugmentation culture was able to spread out the warm water throughout the formation and stimulate beneficial bacteria so that MNA is able to be achieved and CVOC concentrations are decreasing.

Get in touch today